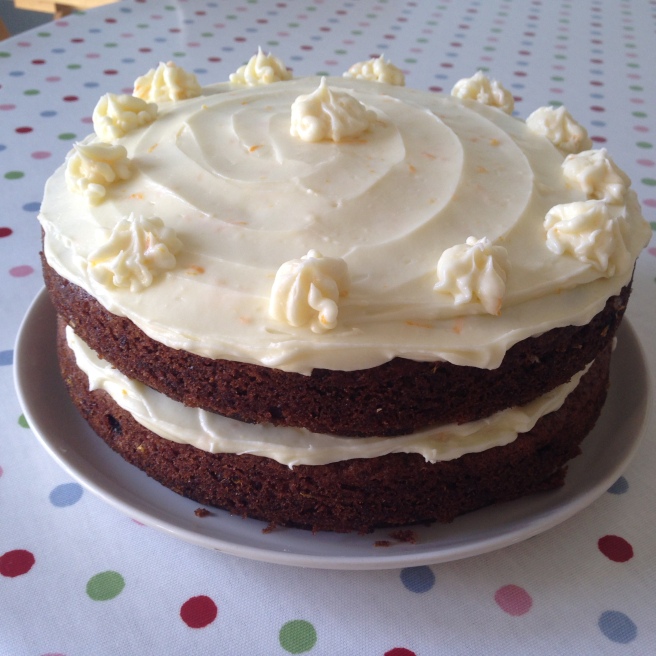 Do the carrots in carrot cake contribute to your 5 a day?  This cake also contains fruit (orange/lemon zest and sultanas) so it’s practically healthy. I made it for Conor’s Grandad’s birthday. There was lots to go around and everyone loved it. You need a bit of patience to do all the grating of carrots and zesting of fruit but after that it’s pretty simple stirring all the ingredients together.

Conor’s other Grandad (my dear dad) died last year following a 7 month illness. His doctors were very honest with him from the start and he was given a very guarded prognosis. Together with his doctors he made the decision to give treatment ago. My dear dad was a realistic optimist. The realist in him knew this illness would probably kill him. The optimist in him hoped the treatment being offered might give him some more time with us. Before his retirement Dad had worked as a project manager. He lived his life with the same level of organisation he gave to his work. Dad subsequently project managed his illness and death. Once diagnosed Dad put his financial affairs in order. He communicated his wishes in relation to end of life care and dying. We were fortunate that we were able to realise Dad’s wish to die at home. I know this isn’t always an option. Dad died at home surrounded by all his family. After his death we used his instructions (in a file on his laptop) to organise a funeral. He got given a day he would have been proud to attend. He even picked out the photo to use in the funeral service booklet. I believe that Dad’s conversations and planning gave us; his family the greatest gift of all. While we were in the grips of grief we were guided by him and his wishes. We were able to come together to give him the death and funeral he wanted. This gives me great comfort.

The topic of death is such a taboo in many people’s lives yet we will all be touched by dying and death. Most of us will also have to say goodbye to loved ones. While my father was dying I observed some people only comfortable to talk to him about the weather and traffic. Dad respected peoples’ comfort levels and he knew who he could open up to. Thankfully there were people for him to have the big conversations with. It could have been a very lonely place for him otherwise.

Conor’s Daddy & I had never discussed dying or death before the sudden and completely unexpected death of our son Conor. To be honest I had never even given the topic much individual thought. We found ourselves with just days to give birth and plan a funeral.  Looking back I’m not quite sure how we managed it but we did. We gave Conor a beautiful service attended by our inner circle of family/friends. We were still far too shell shocked to cope with a large funeral. We are now the owners of a family burial plot with space on Conor’s headstone for two more names. We know we want to be buried with Conor.

Soon after Conor died I wrote to an organisation which runs pre-marriage courses for couples wanting a church wedding in Ireland. Much of the content is outdated with couples now living together before getting married. I told them of the need to add conversations about dying and death to this course. Ireland has changed and people aren’t simply marrying another from the same town as they did in previous generations. Ireland is very much a multicultural state. Indeed Conor’s Daddy and I, like other couples are from two different countries living in a house which isn’t our forever home. Where does this leave couples should one of them get very sick or die suddenly? We are also living in an age of choices around dying and death. There are so many options. There are burials, cremations and leaving bodies to medical science. Dad had the time to plan and communicate his wishes. Not everyone gets this time. We need to open the lines of communication when we are well and able to make decisions. Dying is a part of life. We could take away the taboo and potential loneliness if it could become part of normal family conversation. It would also give loved ones direction at a most difficult time. We all need to have big conversations about end of life care, death and organ donation with our loved ones. It doesn’t have to be morbid. It might sound crazy to some but Dad and I had a laugh at times discussing our thoughts on dying and death. The big conversation may end up being the greatest gift you too can give to your family and loved ones.

Here’s the brilliant recipe. I decided to soak my saltanas in orange juice instead of rum as I’m not keen on rum. It was very easy to turn into a showstopper cake with cream cheese frosting.

6 thoughts on “Food for Thought…”